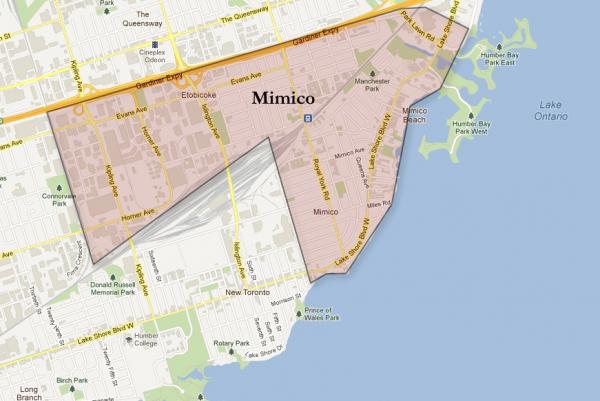 Mimico is the gateway to Toronto’s west-end waterfront neighbourhoods. Known for it’s scenic lakefront parks and countless recreational facilities. A short commute along lake shore boulevard going west brings you right into the little commuter village by the lake. It is extremely easy to get wrapped into the small town feel of neighbours looking out for one another’s children, or by the tiny waterside Parkettes built up to standard with chess tables and numerous seating area for you and your guests pleasures. Mimico became and independent village in 1911, meteoric growth led to its incorporation as a Town in 1917. Mimico retained its Town status until 1967, when it was amalgamated with the Township of Etobicoke.

From an outsider perspective, one would say that Mimico is starting to show signs of a new life along Lake Shore Boulevard, with several restaurants and cafés worthy of its nascent arty credibility. Mimico residents are well served by the shopping districts on Lake Shore Boulevard and on Royal York Road. These shopping areas feature an excellent variety of small locally owned stores and restaurants.

A revitalization plan recently approved by city council caps off new Mimico buildings at 25 storeys while sprouting parkland and increasing access to the lake (it also allows developers to replace the crumbling apartment blocks from the ’50s and ’60s). After years of planning, GO trains are now running every half hour to Union Station, and new businesses are slowly but surely creeping in. Whatever real estate agents might say, the area is a long way from becoming the western Beach. Life is much slower on this side, and there is a very minimal amount of meaningful restaurants and shops. And that’s precisely how Mimico residents like it.

Mimico’s top selling points with prospective homebuyers are the seamless quick and easy access to downtown Toronto as well as its desirable waterfront location. The Mimico Go Train station will get commuters into downtown in approximately 10 minutes. The real estate market in Mimico is clearly on the rise, there is no time like the present to invest and get the best value for your dollar in terms of location. Again, close proximity to their revitalized waterfront trail and ever-expanding linear park.