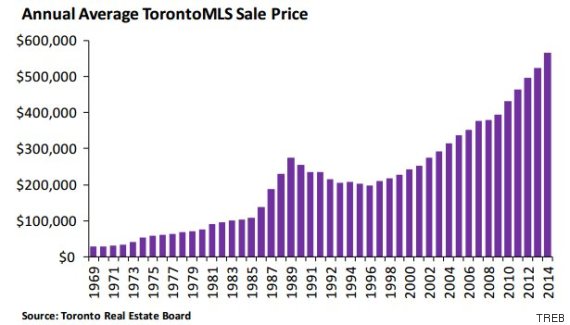 Want to purchase a home in Toronto around $200,000 the best way to do so would be to take a trip, way back through time. The cost of purchasing a home in has risen by an average of 3 % every year over the past 43 years. Year to year there has been a lot of variability dependent upon the economy.

The Canadian housing market has cooled off through the first quarter of 2015. Both the western part of Canada, mainly Vancouver alongside Ontario’s capital – Toronto, has shown no signs of stopping. Canada’s housing economy has outgrown the oil market; we are still in wake of the oil price collapse – both these cities real estate markets are on the rise.

In the suburban 905 region, the average price of a house has reached $709,000-. The price of a single family home in Toronto has surged to $1.04 million, which is approximately 16% increase.

The overall increase in the price of single family homes is due to the fact that the mix of detached homes. Single-family homes in the city of Vancouver have tripled in price over the past decade from $704,00 to about $1.5 million.

The bank recently predicted Canada’s housing market is headed for a prolonged slump, because population growth among younger people in their home-buying years is set to dwindle.

There is nothing on the horizon that will stop the housing market from continuing to soar, along with the simple fact that there is no such thing as a normal market – it is rarely balanced.